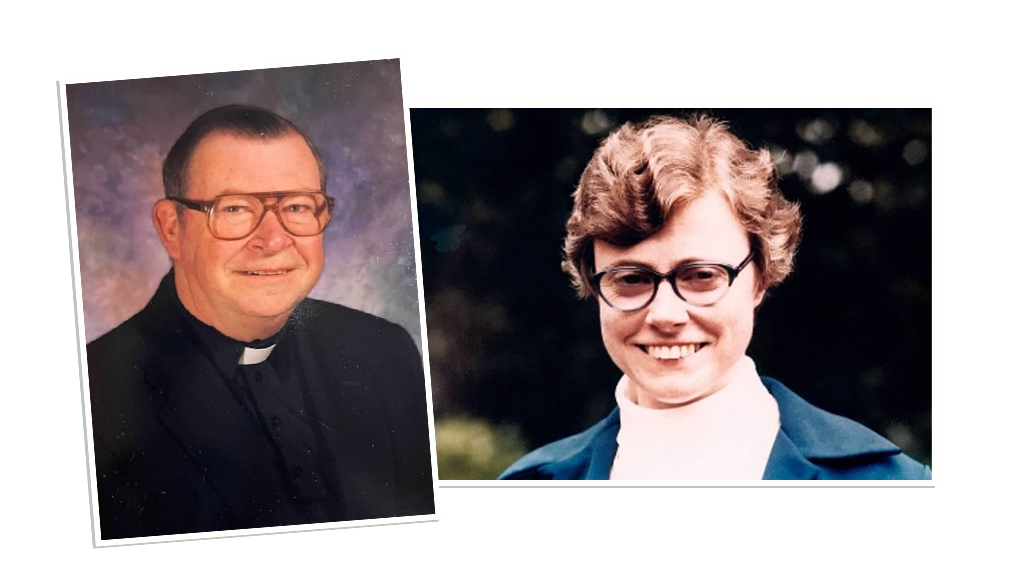 Father J. Wayne Murphy graduated from St. Aloysius (Pewee Valley), St. Thomas and St. Meinrad Seminaries, and was ordained into the priesthood in 1965. He served at 7 different parishes in the Louisville area, including Mother of Good Counsel, Most Blessed Sacrament, St. Stephen Martyr, Guardian Angels, St. Thomas More, and others, before retiring in 2004. Fr. Murphy had a wicked sense of humor and a fun-loving spirit which endeared him to his parishioners. He was well-known for having the shortest sermons and the fastest mass in town. His commitment to serving the Church and strong belief in a Catholic education never wavered as he oversaw many challenges throughout his 55 years as a priest. He inspired his family and friends by creating an annual donation drive in honor of his late sister, Sr. Amelia, to help families afford a Catholic education. Fr. Murphy passed away after a long illness in January 2021.

Sister M. Amelia Murphy R.S.M. was a graduate of St. Aloysius (Pewee Valley) and joined the Sisters of Mercy in 1953. She  earned a Bachelor of Science from Edgecliff College and a Masters in Chemistry from St. Louis University.  Her teaching career included 7 years in elementary schools in Louisville, 3 years at Mercy Academy and 12 years at Assumption High School. After a near-fatal car accident in 1981 left her disabled, her recovery was slowed by crippling rheumatoid arthritis and scleroderma. She spent the last years of her short life dedicated to furthering Catholic education throughout the community. However, it was tutoring students at Mercy and Guardian Angels that brought her the most joy, once remarking that “it’s the only time I am unaware of my pain.”  Sr. Amelia was presented with the Louisville Peace & Justice Award in 1986 and was named Mercy’s Educator of the Year in 1989. She passed away in 1992.

Fr. Wayne and Sr. Amelia were siblings who shared a love of God and family and committed themselves in service to others throughout the Catholic community.

To honor them, the Murphy family has established this scholarship fund to support students in need of tuition assistance at one of the following Catholic high schools in Louisville on a rotating basis:  Assumption, DeSales, Holy Cross, Mercy, and Trinity.