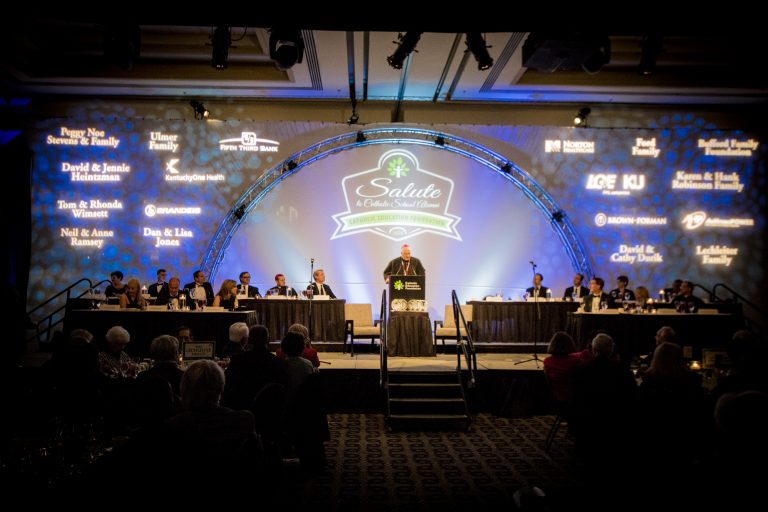 (LOUISVILLE, Ky.) – The Catholic Education Foundation of the Archdiocese of Louisville (the “Foundation”) today announced that its 28th annual Salute to Catholic School Alumni Dinner (the “Salute”) established a historic new high in funds raised in support of its mission.

Held on the evening of March 14 in the Grand Ballroom of downtown Louisville’s Galt House Hotel, the Salute hosted a sell-out crowd of over 1,600 guests, continuing its tradition as a hallmark community event in the Commonwealth.

This year’s event soared to a historic record of $1,000,000 in net proceeds, rocketing past the previous year record of $825,000. Foundation President Richard A. Lechleiter remarked, “Who would have ever dreamed that this event would raise so much to brighten the futures of so many families! We are truly humbled by this result, and thank God for its unprecedented success.”

All of the funds from the Salute will be used to provide tuition assistance to families who cannot afford the full cost of a Catholic elementary education for their children. The Archdiocese of Louisville sponsors 40 Catholic elementary schools in central Kentucky with aggregate student enrollments of 13,500.

This highly successful event was co-chaired by the Most Reverend Joseph E. Kurtz, Archbishop of Louisville, and Kentucky Governor Matt Bevin.

The event’s astounding financial result will allow more students and their families to access a Catholic elementary school journey that they cannot otherwise afford by themselves. During the event, Mr. Lechleiter noted that the organization’s slogan – “The Answer is YES!” – has become a mandate to assist every family who reaches out to the Foundation. “Thanks to our ever-generous donors, in each of the last three years, every single student who reached out to us – and qualified for tuition assistance – in fact earned an award. What could be better for our young families and our community!”