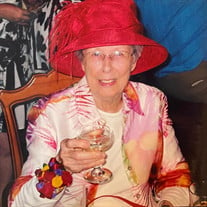 The James family recently founded a new permanent endowment fund at the Foundation in honor and memory of their mother, grandmother, great-grandmother, and great-great-grandmother Evelyn R. James.
Evelyn was born to Joseph Preston Ruley and Mary Eunice Head Ruley on October 12, 1920, in Akron, Ohio. Shortly thereafter the family moved to Louisville. Evelyn was a graduate of Loretto High School. Later she graduated from the University of Louisville with a Bachelor, and a master’s degree, and nearly achieved a Doctorate of Education. She taught elementary school for more than 30 years, first at St. Raphael School, and then at Greathouse/Shryock and Watterson elementary schools at Jefferson County Public Schools, which she accomplished all while being a single mother of 5 children.
As a founding member of St. Raphael Church, she saw that all 5 children secured a Catholic Education thru high school which led to making education her life’s work and priority for her 15 grandchildren and countless great and great, great-grandchildren. Evelyn valued faith-based education, in addition to the character that is developed through Catholic formation. She was an outstanding role model of service to others and contributed immensely to school and parish leadership activities. The faithful example she provided to her family was immeasurable. Therefore, in her honor, the family has established this fund to afford other children the opportunity that Evelyn gave hers.

Earnings from the fund will be used exclusively to provide tuition assistance to Catholic students in the Archdiocese of Louisville.