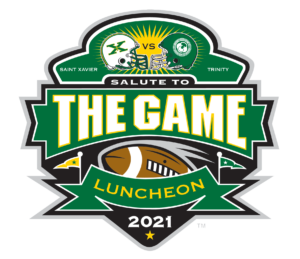 LOUISVILLE, KY (September 23, 2021) – The Catholic Education Foundation of Louisville announced record results from its 14th annual Salute to THE GAME luncheon held earlier today at the Galt House Hotel in downtown Louisville. This unique event celebrates the nationally recognized rivalry and thrill of the annual Saint Xavier – Trinity high school football game to be played at Cardinal Stadium on Friday, September 24 at 8:00 p.m.

This year’s Salute luncheon attracted 600 guests and raised a record net of $525,000, roaring past last year’s previous mark of $500,000.  Since its inception, the Salute luncheon has raised over $3.7 million.  All of the net proceeds from this event will benefit the Foundation in its work to support Catholic education in the Archdiocese of Louisville and make Catholic schools accessible by everyone.

Foundation President Richard A. Lechleiter remarked, “This hallmark community event continues to lift our mission to incredible new heights like no one ever thought possible! How blessed we are by all of our friends in the Saint Xavier and Trinity communities for allowing the Foundation to benefit from this storied rivalry.”

The Foundation recently announced that for the seventh consecutive year, every student applicant with a demonstrated financial need earned a tuition assistance award.  Together with their funding partners, the Catholic Education Foundation provided tuition assistance to an all-time high 3,400 elementary students with a record $7.0 million in funding for the current school year.  Mr. Lechleiter exclaimed, “At the Catholic Education Foundation, “The Answer is YES!”

For the second consecutive year, Independence Bank served as the Lead Sponsor of the event with an investment of $40,000. Mr. Lechleiter remarked, “To President Louis Straub and all our friends at Independence Bank, THANK YOU for your leadership in making this event the largest of its kind across the Commonwealth!”

The major benefactors of this year’s Salute luncheon, each of whom donated $25,000 to the event, were: The D3 Foundation; David and Cathy Durik; The Glenview Trust Company; Sarah and John Lechleiter; Neil and Anne Ramsey; Len and Susan Spalding; the Daniel C. Ulmer Family; Tom and Rhonda Wimsett; and the Richard and Janice Lechleiter Family.

Foundation Board Chair Charles J. Dahlem noted, “Since the onset of the health pandemic, our donors have stood tall like never before to ensure that this organization can continue to deliver on its promise to all our families in need. Indeed, “The Answer is YES!”